U.S. intelligence analysts last week were alarmed when they obtained intelligence showing that Russian Chemical and Biological Weapons units were activated and moving into Ukraine. These analysts knew nothing of what the Department of Defense had been doing in Ukraine in terms of funding military bioweapons laboratories in Ukraine. Without that knowledge, they concluded that Russia was preparing to use chemical and/or biological weapons. Understandable, but wrong. The Russian units were deployed to secure those bioweapons labs. And in the process of securing them they have recovered a treasure trove of documents showing the United States has violated the international accord governing Chemical and Biological Weapons.

Read the whole thing. And now Tucker also has something to say about it as well as ask some simple but extremely unpleasant question for you know who.

The fever pitch hysteria in Western media is not just the matter of raging Russophobia finally breaking to surface, or of some psyops, it is a fear of events like the uncovering of these biolabs and the evidence which will be presented once the War Crimes Tribunal begins its work. That is coming soon. Combined West will have many questions addressed to it and I doubt it will have good answers, if any.

In operational news, the clearing of Volnovakha is complete (in Russian) and once Mariupol is cleared completely Nikolaev and Odessa are next. Here is some March 11 data. 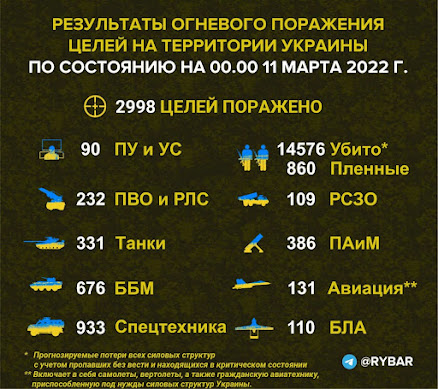 In other good news, Russian troops clearing Mariupol took Mariupol’s main brewery. No, I am serious, they did. Sadly, it is not operational;)
Via http://smoothiex12.blogspot.com/2022/03/larry-johnson-and-tucker-on-biolabs.html?m=1