“The fear of you and the dread of you shall be upon every beast of the earth and upon every bird of the heavens, upon everything that creeps on the ground and all the fish of the sea. Into your hand they are delivered.

Every moving thing that lives shall be food for you. And as I gave you the green plants, I give you everything.”  Genesis 9:2-3

.
There is no doubt that Christmas is a time when we become aware of the precariousness of nature as the sun’s light fades, leaves fall off the trees and the weather gets colder. The sun seems to stop moving (solstice) for three days, and then as if by magic starts moving again in the other direction and seems to be reborn. This phenomenon was noticed thousands of years before Christian celebrations of the birth of Jesus.
.
At some point, elements of Saturnalia, Midwinter, Yule and other pagan traditions became merged into the general Christmas traditions that are observed today. It is a festival that celebrates life in all its forms.
.
Christmas cards glorify nature in their depictions of many types of snowy woodland scenes and animals: robins, reindeer, donkeys, sheep, oxen (bullocks), doves, etc. In every culture today there are still elements of nature-worship: in the maintenance of old traditions like the goddess Pachamama (revered by the indigenous peoples of the Ande) or various forms of neo-paganism that hark back to pre-Christian times.
.

.
Çatalhöyük Wall Paintings, Çatalhöyük, Bull hunting scene. Copies of painting on plaster. 6 th millennium BC.
.
Modern secular paganism places “great emphasis on the divinity of nature” while the animistic aspects of Pagan theology asserts “that all things have a soul – not just humans or organic life – so this bond is held with mountains and rivers as well as trees and wild animals.” For example:”Secular Paganism is a set of principles shared by diverse groups around the world. It is a natural outgrowth of many peoples’ personal ethics and beliefs about life. It is not a religion but rather an ethical view based on the belief that nature is sacred and must be respected and treasured. Secular Pagans believe that we are a part of nature, not her master.”
. 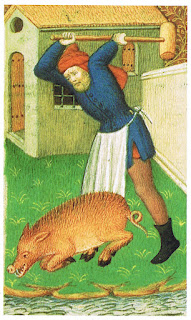 .
Illustration of medieval pig stunning, from The Medieval Cookbook

However, our relationship with nature is contradictory and we treat the different parts of nature in very different ways. This can be seen in the way we treat some animals as pets, others as a danger, and most as a source of food that is produced on a massive industrial scale with slaughterhouses, factories, and many forms of processing. This is reflected in art down through the ages, some of which glorifies hunting and killing animals, and some which tries to show the terror animals are put through before coming to a grisly end. In her book Why We Love Dogs, Eat Pigs, and Wear Cows: An Introduction to Carnism, Melanie Joy tries to make sense of this and theorizes a distinction between carnivores and carnists: “Carnivores require meat in their diet for survival, but carnists choose to eat meat based on their beliefs.” Thus:
.

“Carnism denies there is a problem with eating animals; second, it justifies eating meat as normal, natural, and necessary; third, to prevent cognitive dissonance, carnism alters the perception of the animals as living individuals into food objects, abstractions, and categories. Joy argues there is a neurological basis for empathy; most people care about nonhuman animals and want to prevent their suffering. Further, humans value compassion, reciprocity, and justice. However, human behavior does not match these values. To continue to eat animals, Joy argues, people engage in psychic numbing, which alters the perception of our behavior towards animals and uses defense mechanisms to block empathy.”

.
Psychic numbing describes the way we withdraw from overwhelming issues like the contradiction between our love of animals and the way we treat them. It can be the way we deal with many big problems such as “impending doom, chaos, and ultimately mankind’s extinction.” 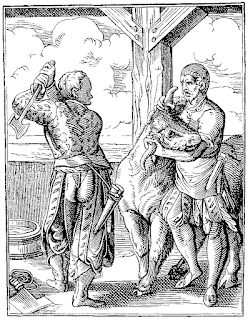 The Butcher and his Servant (1568), drawn and engraved by Jost Amman

We withdraw because we know that dealing with one serious issue tends to open up many other interlinked issues, while, at the same time getting progressively bigger as well as stretching backwards and forwards in time. Claudia von Werlhof grasps these widening problems and deals with them head on. She believes that the essential problem is rooted in an ideology which has as its basis a hatred for life itself. She blames the centuries-old socio-political systems of patriarchy and capitalism that are “characterized by exploitation, extraction and appropriation.” She notes:

“The sinister motive of hating life needs to be hidden. The unspeakable crimes that all patriarchies have committed against life itself, against children, women, and all human beings, against the Earth, animals, and plants must not be revealed. The hatred of life is the reason and the rational justification for the violence against it; a violence that intends to prevent any rebellion or uprising of those not believing in the system it protects; a system that many would see as a grave assault on their dignity if they only recognized it.”
.
Furthermore she makes a distinction between killing and death:
.
“It has been repeatedly suggested that the patriarchal system is a system of death. That is not entirely correct. The patriarchal system is a system of killing, that is of artificial death: ecocide, matricide, homicide in general and finally “omnicide,” the killing of everything. […] We are up against a totalitarian system that does not care for its subjects, that cannot (or no longer) be stopped, and that is constantly becoming faster and more efficient in its attempt to end life on this planet – while turning even this very process into a tool for further accumulation of profit and power.”
.

Over the centuries the system of killing has become more and more sophisticated. In art, depictions of hunting show changes from trapping to chasing with dogs to shooting with guns. In many paintings dogs are the ‘collaborationists’ who turn on their fellow animals for the benefit of their masters. 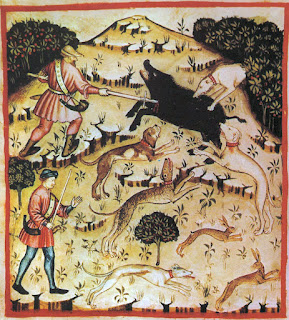 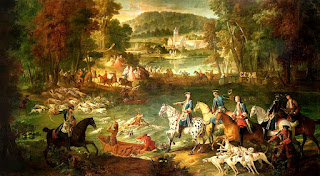 Jean-Baptiste Oudry, Hunting At The Saint-jean Pond In The Forest Of Compiegne, Before 1734

In one extraordinary set of paintings by the artist Paulus Potter (1625–1654), Punishment of a Hunter, we see different forms of entrapment and killing depicted around two central paintings, one of which shows the hunter going on trial before a court of animals, while the other shows some animals dancing for joy as the ‘treacherous’ dogs are hung and the dead hunter is roasted in a roaring fire. 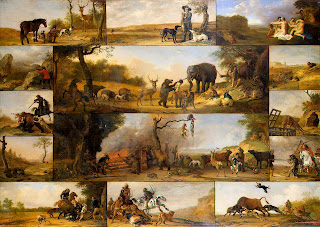 Punishment of a Hunter, painting with 14 frames by Paulus Potter, 1 of which is by Cornelis van Poelenburgh (ca.1650) 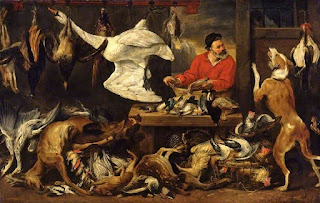 .
Frans Snyders (1579-1657) (studio of) – The Fowl Market
.
Changing attitudes towards hunting and selling of animal carcasses has been growing in recent decades and can be seen similarly in the artistic depiction of such practices as Maxwell Williams notes: “Upset students at Cambridge University successfully petitioned to have a painting depicting a butcher removed from their dining hall. The painting, The Fowl Market by the studio of early-17th-century Dutch painter Frans Snyders, loomed large above those in the dining room at Hughes Hall, a postgraduate school within Cambridge. The painting depicts the butcher at his labors, surrounded by a veritable mountain of dead animals. Nearby, a living dog appears to be barking.”
.

Negative attitudes towards hunting on land also extend to whale hunting and fishing as the seas are depleted of life and thus potentially creating a catastrophic collapse of the marine ecological cycle. Factory ships, fish farming and whaling have come in for much criticism, while quotas for certain species of fish have been imposed by governments due to overfishing.  In the examples shown here we see whale hunting being depicted as heroic as the hunters deal with huge whales and fierce weather, then an ambivalent merchant, to a later painting of a cruel, knife-wielding monger. 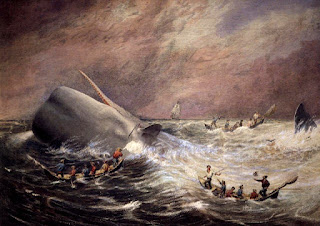 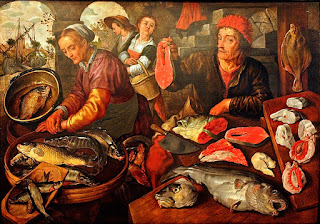 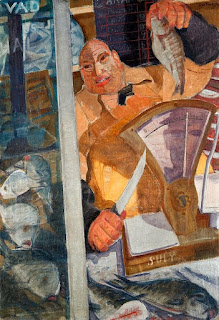 The greatest criticism in recent decades has been reserved for the practices carried out in slaughterhouses using what were declared to be ‘humane’ ways of killing animals. Time and time again shocking, secretly filmed footage has emerged of extreme cruelty towards sentient beings uttering horrific shrieks as they are chased and battered to death. In recent depictions shown here artists use Expressionist techniques to try and depict the horror of the slaughterhouse bloodletting. 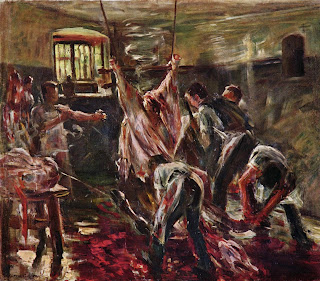 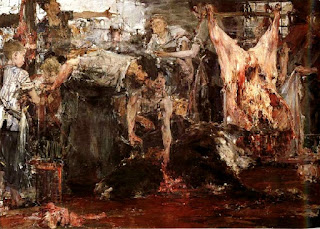 Sue Coe (born 1951) is an English artist and illustrator who goes one step further by using her works to benefit animal rights organizations as well as illustrating books and essays to explore issues such as factory farming and meat packing. 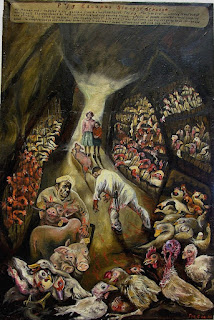 The struggle against all these different old and modern practices of industrializing and converting our fellow beings into various types of products seems to be finally taking hold of the popular imagination.  In a recent article in the UK Andrew Anthony wrote that:

“Meat consumption in this country has declined by 17% over the past decade. The Economist magazine named 2019 “The Year of the Vegan”. And last year the World Health Organization recommended a plant-based diet for a healthy life. That endorsement, along with growing concerns about the impact of dairy farming on the environment, combined with the lifestyle rethink enabled by the lockdown, has significantly increased the number of people turning their backs on animal products in the UK.”

The Vegan Society commissioned research that found that: “At least 542,000 people in Britain are now following a vegan diet and never consume any animal products including meat, fish, milk, cheese, eggs and honey. This is a whopping increase since the last estimate of 150,000 ten years ago, making veganism one of Britain’s fastest growing lifestyle movements.” Furthermore, Jasmijn de Boo, CEO of The Vegan Society commented that “more people than ever before are acting upon the health and environmental benefits of veganism, and finding out what really goes on in the meat and dairy industries and deciding they do not want to contribute to the pain and suffering of animals.” Maybe we are seeing the seeds of a new enlightened attitude towards animals which will also be reflected in a more positive art in the future.